In this tutorial in english for Blender 2.8 we will see how to make an animation of particles along a path, in particular a spiral, to create a particular effect as during the launch of a magic spell.

Now let's create the spiral that must be covered by particles. To speed up the work we use the Extra Objects addon: 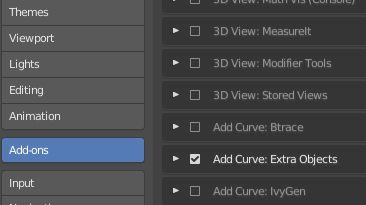 Before performing other operations, in the popup menu at the bottom left

we set the following values

Turn: 5, that is we want the spiral to make 5 turns (we will have a "five-story" spiral)

Steps: 29, each turn of the spiral must consist of 29 segments

Height: 1.02, if we do not give a height to the spiral this will remain flat, so we set the height at which the spiral must rise at each turn

Output Curve Type: Bezier / Auto, the spiral created must be a Curve and we want it to be smoothed, so we choose the most suitable vertex type

As a particle emitter we use a UV Sphere, created by pressing SHIFT+A and choosing Mesh > UVSphere, which we will scale (in this case) to 0.1311 and position it at the beginning of the spiral, more or less at position x: 0.993 and y: -0.14. We confirm the resizing by pressing CTRL+A and then selecting "Scale".
We create an icosphere, scale it by 0.0866 and press CTRL+A to apply the dimensioning.

We associate to the icosphere a "Emission" material with a hexadecimal color E7CE5F and Settings > PassIndex: 3 to identify it later in the Compositor 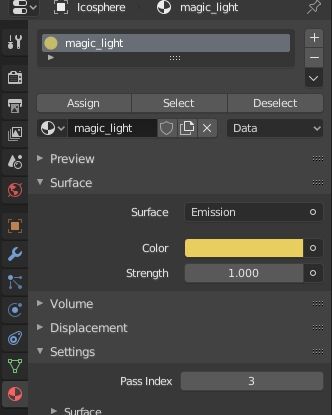 Holding the selected icosphere, we press the M key and insert it into a new "Particles" collection. 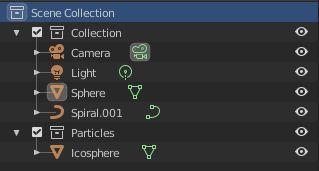 and we click on the option to hide the icosphere in the 3D View, which will remain available to be used in the particles system.

We select the UV Sphere, created before, and we associate it with a new "Emitter" type particles system; to do this in the Properties Window on the right, in the "Particles" tab, we create the system by pressing the "+" key and assign the value 5000 to "Number", "Lifetime": 2000 and "End": 2000

and in the "Render" sub-panel we select "Render As": Object and Object> Instance Object: "Icosphere", thus causing the icospheres to be emitted. We also remove the check mark from "Show Emitter", so as not to display the UV sphere emitter during rendering, and set "Scale Randomness": 0.485 to make random-sized particles be emitted

We add a further "randomness" by resizing the particles according to the position of the moment, adding a texture that influences the size (see also the tutorial how to resize particles via textures ). In the "Textures" sub-panel at the bottom we create a texture and call it "textureparticles"

and in the "Mapping" sub-panel we select "Coordinates": Strand / Particle

the texture will have to affect only the dimensions, so in the sub-panel "Influence" we check only the "Size" option to which we give value 0.6

this should cause the particles to enlarge and shrink during the movement, emphasizing the shimmer we will provide later.
We return to the "Particles" tab and remove each initial velocity from the particles, setting in the sub-panel "Velocity" > Normal: 0 m / s

We select the spiral and add a force that drags the particles along the curve: in the "Physics" tab we add a "Force Field", with Settings > Shape:Curve parameter indicating a force that must attract along a curve

If we give to "Strength" a positive value, the particles will be rejected by the curve and will be dispersed

While if we give to "Strength" a negative value, the particles will be attracted and dragged along the curve. We therefore assign a value of -3.3 to "Strength" and start the animation by pressing the SPACE key

As you can see the particles follow the curve, but they disperse too much. We therefore increase the value of "Flow" which allows to bind the particles in a flow around the reference curve, the higher is its value the more the particles will be "tightened" around the spiral. Set Flow:0.5 and get the desired result

But the animation does not allow you to cover the whole spiral, so in the "Output" tab we set an End:600 value in "Dimension"

getting the final result

but if the "End" and the "Lifetime" of the particles had a value of 2000, why choose a number of 600 frames for the animation? Because the particles arriving at the top of the spiral go back and then we cut the animation first.
We position the room properly

The glitters in the Compositor:

To assign a shimmer to the particles we will use a "Glare" node in the Compositor, applied to the material through the ID Mask node (alternatively we could use Cryptomatte, see Cryptomatte in Blender 2.8, a revolution ).

In the "Render" tab we select Cycles in "Render Engine", 128 samples can suffice (and eventually we assign an adequate number of tiles in "Performance" adapting it to our hardware)

In the "View Layer" tab in Passes > Data we put the check to the "Material Index" option, to display the "IndexMA" slot in the "Render Layers" node in the Compositor

In the top menu click on "Compositing" and open the related workspace, then check the "Use Nodes" option and two nodes will appear: "Render Layers", which represents what is rendered, and "Composite", that is the final result after compositing operations. 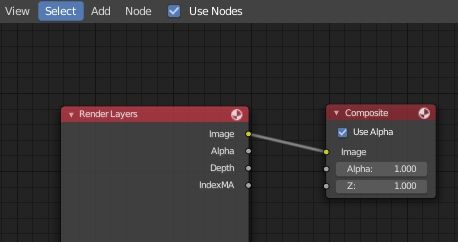 In the Compositor menu we select Add > Output > Viewer and the Viewer node is created, which we will connect to the "Image" output of the "Render Layers" node

Check if "Backdrop" is checked to activate the preview

We start the simulation by pressing SPACE, once the cycle is finished we render the frame 600 by pressing F12

and the rendering result will appear in the Compositor

We create now the mask to select the particles using their material, then insert the "ID Mask" node by selecting Add > Converter > ID Mask from the menu, connecting it to the "IndexMA" output of "Render Layers" and to "Image" of the node "Viewer". In "Index" we assign the value 3, which before we were associated with the particles material

As you can see, a mask has been created to select all the particles that have that material.

Now we select the particles in the image, using the newly created mask, inserting a node Add > Color > Mix; in an "Image" entry of the "Mix" node we will link the image created with the rendering, in which the particles will be selected with the mask exiting from "Alpha" of node "ID Mask", in the space not occupied by the selected particles we will insert a black color (both to better visualize the result of our work and to use it later as a neutral color in the next "Add" node)

Now let's add the "Glare" node, with Add > Filter > Glare, between the "Blur" node and the "Viewer". We want to create stars and choose the "Streaks" option because it is more versatile than "Simple Star"; we give value to the threshold "Threshold": 0.4 in order to make them visible, number of strips per particle "Streaks": 6, and rotation "Angle Offset": 15° to avoid that they seem too tidy. We will not change the values of "Mix" (which allows you to mix the color of the strips with that of the particle object) and not even that of "Fade" (which indicates the degree of fading of the strip compared to the rest)

Now apply the processed particles to the rendered image using an "Add" node (obtained from the Add > Color > Mix node in which you have chosen the "Add" option). The streaks and the halo around each particle are added to the initial image,
while the black background would not in any case be added because the color value is zero and therefore neutral.

We render by pressing CTRL + F12 and we will get our animation.

Here ends this tutorial for the realization of an animation of particles along a path, as if they were the powder of a magic spell, to be used perhaps as a special effect to make a person or an object appear, or to perform a transformation of an object in another, or by wrapping the spiral around a warrior's arm to magically make the piece of armor appear. You can also make some changes, using two spirals at the same time and of different colors, or animating the strips, by clicking with the right mouse button on the "Angle Offset" value of the "Glare" node. Good work and happy blending!

In this tutorial in english for Blender 2.8 we will see how to create a small morphing animation through a ...