Home > Blender > Interface > Blender: where is the startup file

In this tutorial for Blender (2.83+) in english we will talk about the startup file and the configuration files, what they are and where they are.
Whether we install Blender or we unpack the "portable" version zipped in the desired directory (both of these types of distribution are downloadable from https://www.blender.org/download/), when we use Blender we have the possibility to save, in addition that our project in our .blend file, also the elements present at every program start, including the arrangement of windows and panels.

But where is this data stored?

Where the configuration files are saved:

In most cases we can find them in a directory contained in the one corresponding to the user profile, whose path will then be customized based on the username used, defined during the installation of the operating system or during the assignment of an eventual account. The place where the configuration files are placed depends on the operating system:

where instead of 2.83 there will be the number of the version of Blender you are using

In it we can find two further subdirectories, "config" and "scripts"

The "Config" directory, as the name suggests, contains the Blender configuration files 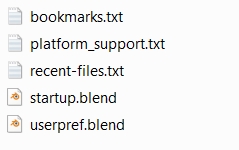 in this image we see the files already present, but when we use a portable version for the first time this directory does not yet exist, in fact it will be created together with the first configuration file, inserted following a particular operation carried out while using Blender:

- bookmarks.txt: refers above all to the actions we perform in the "Blender File View", since it contains both the directories that we have saved in the "Favorites", and those that we have visited recently and contained in "Recent" (see the panels on left side in the Blender File View)

- recent-files.txt: contains the names of the files recently opened, those that you can also view from the File > Open Recent menu

when we load a project with File > Open, the recent-files.txt file, containing its complete path, and the bookmarks.txt file (with the [Bookmarks] section inside, for now without data, and the [Recent] section with the directory of the newly opened file) will be created.

- startup.blend: contains information on the interface configuration, as it appears when we start Blender, and will be created if we save the settings of the objects present in the 3D View or of the windows, using the menu function File > Defaults > Save Startup File

- userpref.blend contains the settings of the options that we had saved in the Edit > Preferences window

For example, if Blender 2.83 is present on our PC and the portable version of Blender 2.90 is downloaded, unzipped into a directory and started, the directory in AppData\Roaming\Blender Foundation\Blender\ relative to 2.90 is not created immediately, and not even when you start the program by clicking on blender.exe, but only when an update of the information is carried out. This can be done in two ways: as seen before, by uploading a file or saving the state/options present, or by importing the configuration of the previous version, which can be done by clicking on the appropriate button on the splash screen at startup 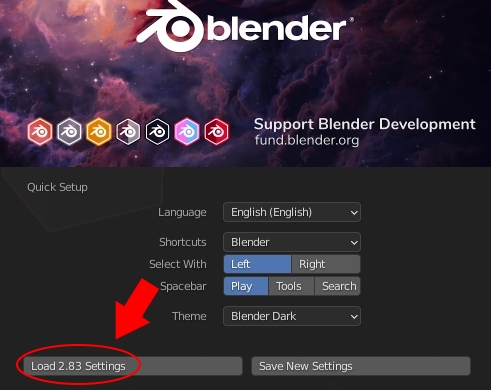 The "scripts" directory is created by importing and activating addons, which are not already included in the downloaded Blender distribution (if we install, for example, the MB-Lab addon for character creation, which you can download from https://mb-lab-community.github.io/MB-Lab.github.io/, the MB-Lab directory is created in scripts \ addons containing the whole MB-Lab addon), or by importing the options from a previous version; in fact when you import the settings from a previous version of Blender, in addition to the creation of the appropriate directories all the files of the addons will also be imported.

Now that you know the locations of these files, you can transport Blender settings from one PC to another, having the same operating system or belonging to the same family.

How to make the "tmp" directory local in Blender:

When we start rendering an animation, according to the default settings, the PNG files representing the frames, or the final video file, are saved in the "/tmp" directory, that is, in a subdirectory of the root, in which the operating system is contained, or the root of the account.
However, when we are managing another project and starting to render another animation, the files will be overwritten. To solve this problem we insert the "tmp" directory in that of its related project including, in the Output sub-panel of the Output Properties tab in the Properties Window, the relative path "//tmp\" instead of the absolute one "/tmp\" 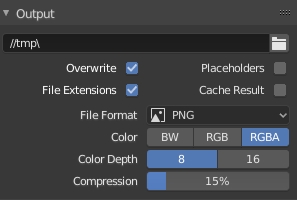 in this way at the moment of the first creation of the png frames, or of the video file, the "tmp" directory will be created in the project directory and the files will be inserted there, avoiding any deletions by going from one project to another.

That's all for this tutorial, happy blending!

Blender change shadow intensity and color with the Compositor

In this tutorial for Blender (updated to version 2.9) we see how to change the color and how to darken/lighten ...